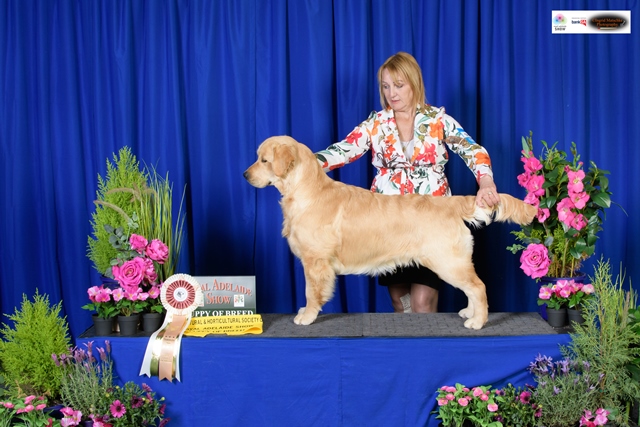 WOW what a start to this young mans career. Hip, Elbow, Eye tested, Heart Clear and DNA FULL PROFILE. Son of Santamaria Blow Me One Last Kiss who is full sister to Supreme Ch Santamaria Indecent Proposal and the beautiful Canadian and American and Australian Supreme Champion Nautilus Great Barrier Reef. Freddy is now at PUBLIC STUD and is a PROVEN SIRE Freddy has gained his Australian Championship by 11 months of age. He is already a multiple Class in group and Best in Group winner and has just been named PUPY OF THE YEAR (DOL) for Victoria for 2019. Freddy has also qualified for TOP PUPPY . You view all his clearances NO copies are given out. for any of our dogs. Freddy is now 18 mths of age and stands at stud. 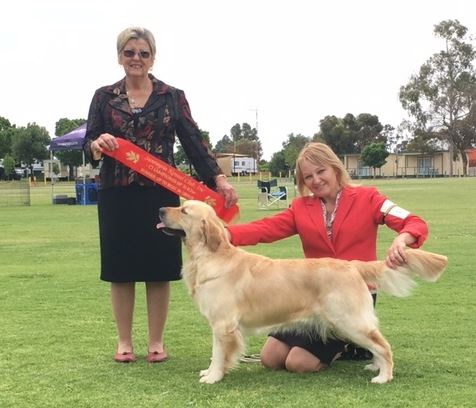 MeMe is a repeat mating which produced Indecent Proposal. She is a multiple Class in Group, Class In show winner. MeMe became a aust ch at a very young age, always in the shadows of her full sister Demi, she was best of Breed at the 2014 Royal adelaide show beating Australias Top goldens under a well know Canadian judge. 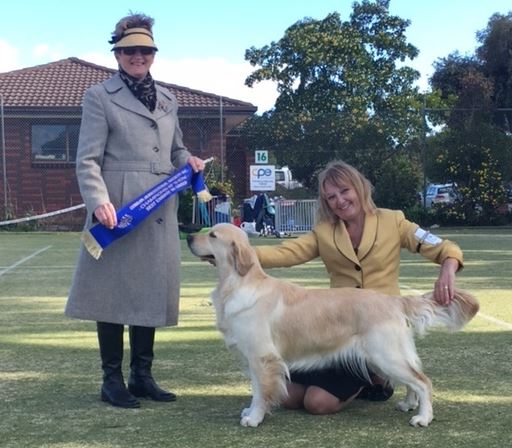 This absolutely outstanding bitch has reached more than any breeder could wish for. She is a multiple All Breeds Best In show winner, Best in group, runner up in group and has amassed over 60 class in group and in show awards. She currently is Number 1 bitch in Australia and Number 1 Golden in the state of Victoria. DEMI does it again, leading Bitch for the state for 2019 and taking out BEST OF BREED at the 2019 Royal adelaide Show. After her maternal duties Demi will be back where she loves , int he ring.

Our newest member to the kennel is this beautiful bitch Winx, from our lovely boy Austin and Maxi, her pedigree has some of the best lines to offer. She currently sits at Number 1 Puppy in the state, a multiple class in group and class in show winner under the most esteemed judges from all over the world. Winx will be mated again for the last time 2022. 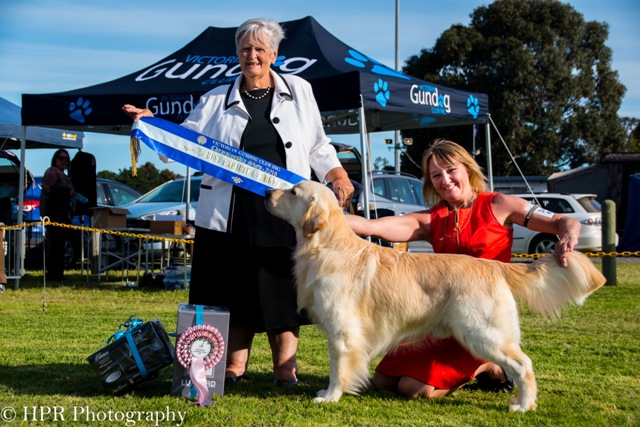 Harvey is now a Supreme Champion and a Dual Grand Champion in Track and Search. He won the Golden Retriever club of Victoria’s Intermediate of the year for 2014 and 2015. He also holds obedience titles Community Companion Dog and Rally Novice. He is beauty and brains. Harvey won Best in Show at the Victorian Gundog Show 2016 and Best of Breed at the Royal Melbourne Show 2017. He also won dog challenge at Adelaide and Melbourne Royals in 2019. As there is no more Harvey can achieve in Track and Search he is being trained in scent work and tricks. This will be his 2020 projects. Harvey is the most titled golden retriever in Australia and the best pet anyone could own.

Jan 2011. News so far Grand Champion Santamaria Manadleh has been aclaimed as Top Golden Retriever Bitch for the state of Victoria and 6th overall for Australia (DOL). As well as the above we have been honoured to be acalimed as the Top Golden Retriever Kennel for Victoria and 3rd overall for Australia. We have so many exciting plans for 2011 with 2 litters planned with our 2 top bitches, Mandaleh will be having her last litter and Charli her first. Both bitches have been planned to Australias top lines. 2010. Has been such an awarding year for us, with Mandaleh, Boy Wonder, our young recruits Charli and Drama being virutally unbeaten. Our youngest stars Charli (Long Kiss Goodnite) and Drama (Drama Drama Drama) have both gone only 2nd to Mandaleh. Boy Wonder is now residing in New Zealand with Jan Cook as well as Tiki (Blaze of Glory) and Lily, who has gained her New Zealand championship in only a few months of her arrival.

WOW what a start to this young mans career. Son of Santamaria Blow Me One Last Kiss who is full sister to Supreme Ch Santamaria Indecent Proposal and the beautiful Canadian and American and Australian Supreme Champion Nautilus Great Barrier Reef. Freddy has made his mark in the ring BIG TIME, watch out for him and his sister Dixie. STOP PRESS Freddy goes Puppy of breed and makes the final cut for Puppy in group at the prestigious Adelaide Royal. November a huge month for this bloke. Dog CC and RUBOB being awarded highly over National winners under Gundog Speacialist Mr Bott from the Uk Then the following few days he did not disappoint with Freddy going Puppy in Show and BOB under Michelle Roberts (WA) and Puppy in Show under Mrs Wendy Baker (SA) Freddy awarded Puppy in Group under Duncan McAlister and BOB At only 9 mths of age he is nearly titled, what a amazing young male. And DOL Leader for Puppy of the Year (Vic) Goldens Freddy now a proven sire, and an exciting future ahead

Santamaria announce that we have strict restrictions in place to avoid our lines being used to lines which would not be beneficial to our name. All our progeny are tested for hips, elbows, hearts eyes as well as glaucoma. We will do anything to protect our lines and our name. We pride ourselves with over 40 years of knowledge and a life time of being with Goldens, we have had the priviledge to have known Australias top dogs and breeders. We still have a close alliance with the most respected Australian breeders. Buyers should be aware of any breeder which cast doubt on our most respected and long breeders. If you are a prospective buyer be careful of those so called breeders who belittle others on their web sites or when asking for information. All orders placed with Santamaria are done so over the phone or in person and all conditions are always disclosed.

May
another busy month for us at Santamaria, with a litter of lovely puppies sired by our Best In Show winner “Austin” and keeping up to date with judging and other day to day business Santamaria ends May with still being TOP Bitch and Puppy in our state and TOP breeder in our state.

April
A bucy month judging for me, in NZ with some outstanding dogs.
We travelled to Mildura for a weekend of shows and again Austin, Hilary and Charli taking out Top Awards with Charli coming back into coat and taking Intermediate in Group both days.

March
Hilary is back in the ring and has matured up very nicely taking many Junior Bitch 1st, and now starting to behave as she matures. Long Kiss Goodnite still Number 1 bitch in Victoria with an incredible tally of points towards her Grand Championship. Austin again Top Puppy and now a proven sire with a wonderful hip score just back.

Jan 2012.
another great month but a more lighter month as well being so hot. Austin goes BOB at his first 2 shows for the year and another few Puppy in group awards.

Austin also been given invitiation to Victoria Top Puppy Award, We are so very proud of him.

December
A quiet month however we ended the year with both Hilary and Austin winning Minor in Show and Puppy in Show as well as Hilary earning points for her Australian Championship and Austin gaining more points putting him closer to his title.
Santamaria ended up being the TOP GOLDEN BREEDER in the state of VICTORIA as well as taking out No 1 Puppy with Austin and No 1 and No 2 Bitch with charli and Drama.
A Great end of the year for us.

October
WOW what a month we have had so far, “Austin” half way to his Australian Championship at 8 mths of age, Puppy in show and Runner up in Group under interantionally acclaimed judges. Drama only 2 pts away from her title and l passed my Hound Championship licence which now gives me 3 championship groups. Phew, busy month and more to come.

September
A busy time for us at santamaria with caring for our litter and study time for me. All our dogs gained top placings at Australias largest show.

August 2011.
Its Baby Time at Santamaria with Star due to give birth at the beginning of the Month.

July 2011
Drama goes Bitch CC and RUBOB at Junior Kennel Club of Victoria and both Austin and Million Dollar Bay , “Hilary” both respectively winning every baby class for the enntire month with austin going Baby in Show at the prestigious Melbourne Dog Club Championship Show.

Saw a great number of shows with this time our new man “Austin” winning many baby in group awards. Drama also nearing her title at only 12 mths of age.

May saw us start the month in style with Austin making his debut, the return into the show ring with Mandaleh and yet another Res CC and RUBOB with Drama.

Austin, Man Of Mystery goes Baby of breed both days on the 28th and 29th of May and tops May off with Baby In Group under Mrs Steidel (USA) on my birthday.
Hilary makes her debut socialising also.